Recently when commuting home I asked my adult kid to put on Gary Numan’s Cars on Spotify. We jammed out and then the auto play put on another song by Mr. Numan called M.E.  Well it left us gobsmacked.  We knew right away that this was a special song.

Why?  Where’s Your Head At by Basement Jaxx was using this as the track! My kids used to love playing Disney’s Extreme Skate Adventure and this was a song on that soundtrack. I hope he got royalties!

So I it got me real curious about this song. I can feel so many bands were inspired by his vibe like MGMT. I have no proof but just a hunch.  So I went off to GENIUS and found the info on the song. 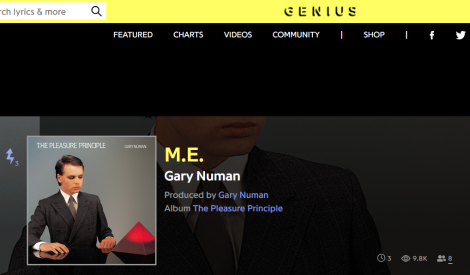 The song M.E. is sung from the point of view of the last living machine on Earth. The people have all died, the planet is laid waste and its own power source is running down, I used to have a picture in my mind of this sad and desperately alone machine standing in a desert-like wasteland, just waiting to die.

With all the talk of A.I. recently I feel like Mr. Numan was a real visionary way back in 1979.  This search lead me to the discovery of a book “Gary Numan Tracks Song By Song Album By Album: Volume 1 by Paul Goodwin” that is about every song he wrote and the meaning behind them.  I think I will check it out once I catch up with my reading list.